Today I made a nice long walk with all three dogs. Lovely sunshine!

The big boy went once to the other side of the fence, checking if he could see his friend behing neighbour's living room windows... I have started to reinforce recall in from the backyard, back to basics.
Lähettänyt Lumipyry klo 13.37 Ei kommentteja:

Cold, colder, and some light at the end of the tunnel

Finally weather is more reasonable, and I was able to take Hoppu and Neeo for a walk. Only 15 minutes, but they clearly enjoyed it. After that it was Kumma's turn. We met a new retriever friend, and Kumma had a good play and wrestle session with him. That was needed, he was such a jumpy fellow after spending daytime quietly at home.

Bad news is that our agility club's indoor facility will be closed for some time due to issues with its mechanical structure. No jumping seminar that was supposed to be next week, no weekly puppy class for some time.

I haven't had time to write too much about Kumma's training, and now don't know from where to start. I try to put something together here.

At home we have concentrated on two things: increasing time (stay inside, door open) and how to behave when a doorbell rings. The doorbell project is challenging, but I have to say that Kumma is proceeding well. Challenging factors is two IGs which go nuts whenever there is someone on the door. With Kumma I have builded a lot of value staying in the crate whatever happens around him. Mostly he does that really well. I have also started to introduce the sound of the doorbell as a cue for him to go into the crate. It is not enough to go there, but he has to stay quiet as well. Two barking dogs are more than enough. I'm getting more and more frustrated with Hoppu's and Neeo's behaviour, but retraining two oldies is not possible now. Since Hoppu lost a vision from one eye, he has become more and more vocal. Balancing lost of one sense with another (can't see you, but you hear me...)? So I'm trying to a lot of effort in training Kumma with all of these everyday distractions...

I'm using a soft crate during training sessions. There are two reasons for this. I'm able to practice crate games each time, and I'm able to control Kumma's behavior better when he is waiting for his turn. I don't want him to start barking white waiting, and I'm trying to avoid those situations as much as I can. This week when I had a 1 hour training session with Kumma, I was able to keep the crate door open all the time. He stayed nicely inside whenI was moving obstacles or doing other preparations. He was able to relax and rest while keeping eye on me. Only once he moved his front feet outside the crate, then I just closed the door for some secs. There were only the two of us, so minimum amount of distractions. Once another dog was barking outside, right behind the wall, but Kumma stayed in the crate, quiet.

I wanted to add fun and speed to 2o2o training, and started to add handler movement. Last time I also added a tunnel as a distraction, but also as a reward and I could release him into the tunnel. I haven't started training a full dogwalk yet. Kumma has done it only a couple of times, just to have something to think of. Being a big BC with long stride, I have to decide what to do with upside contacts. I've been thinking of a box method.

Success with one jump

I've been watching again this great DVD by Susan Garrett. It includes good foundation exercises with one jump, and we have been practising some of them. Once we can start garden agility, I can focus more on this type of exercises (and start 2x2 for weaving).

Handling training done so far has been really simple. Front cross, some rear cross foundation, going around. There are so many handling terms nowadays that I don't know half of them. I have time to learn and decide which ones are for us. I don't want to make it too complicated, and rather use time for foundation and consistency.

Only one session left, this course has been really good! Last time we had one instructor only for us, following each step and giving advice. Kumma was offering too much movement, and not using his nose clearly enough. After some changes he started to use his nose, and pointed the jar with tea scent clearly.

This is not all, but enough for today.
Lähettänyt Lumipyry klo 13.39 Ei kommentteja:

As Kumma is now a big boy, a jump bar was introduced to him yesterday. Only four jumps, and he was clearly tired after that. He had a lot to think :)

Today evening I took Kumma for an evening walk. It was really cold, -24C, and I decided to put his brand new red coat on him. Kumma was so amazed that we had a peaceful walk, no pulling and jumping. At the end he was ok with the coat, even had a few runs with fun style.

Neeo joined agility training yesterday. He was full of energy, and we had some fun drills with low jumps and tunnels. Once he got out of the tunnel pretty slowly. Later I noticed some blood in a crate, and found out that one of his nails was broken. Good news is that it does not bother him.

IGs are living inside. Perhaps next month they can join for a walk?
Lähettänyt Lumipyry klo 13.54 Ei kommentteja:

I don't like coffee, I don't drink it at all. Tea is my thing, black tea, no sugar, no milk. Darjeeling is my favourite. And I'm going to have a tea dog! Well, at least for a while. I wanted to try something else than agility with Kumma, and decided to take him to scent discrimination training. This is completely new for me, and I find it really fascinating. Smell of tea is used in training, but similar training method can be applied for any other smell and purpose. Perhaps chanterelles and other mushrooms? Missing gloves and socks? Car keys? Kids? 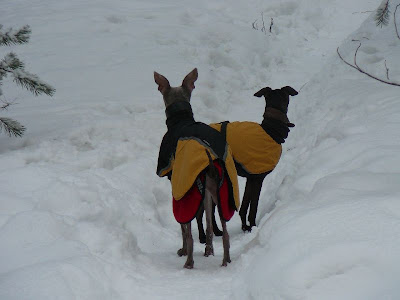 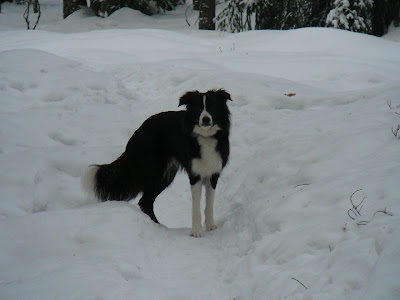 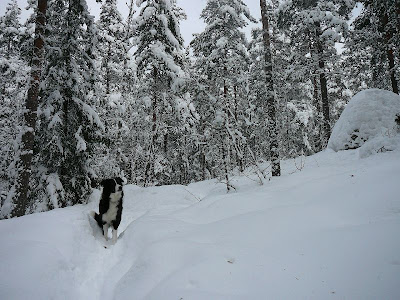 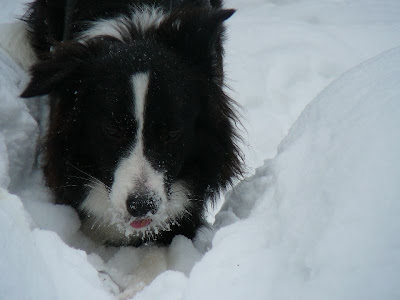 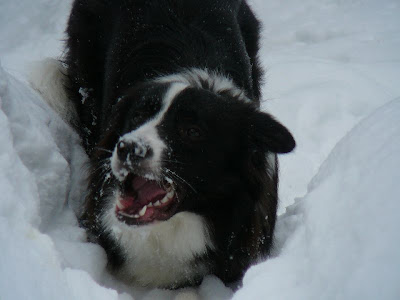 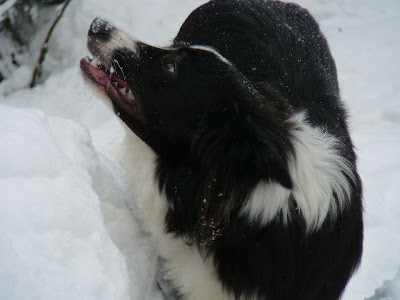 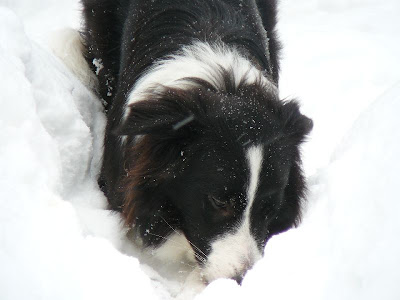 On the other side

Our garden fence is not a limiting factor for Kumma anymore. On the other side, there is neighbour's puppy, a fun friend to play with. With the help of high snow level this new buddy can be easily reached. No need to jump, just step over. Great.
Lähettänyt Lumipyry klo 13.06 2 kommenttia:

Yesterday Kumma had an opportunity to burn energy with our neighbour's puppy (4-months-old bichon havanese). We had a walk in the woods, and puppies were wresting and running. In the beginning it was a bit out of control, as both of them were over excited. Pretty soon they got their brains back, and I made some recalls and playing with Kumma, and then let him run off again.

Today I was working at our agility club's trial, and Kumma was with me in the office. He was able to relax in his crate for several hours, even if people came in and out all the time. He has a short playing session with another puppy, and I took him outside a couple of times. At the end I had a playing session with him, and he was very excited and well focused. This was good practice, as next weekend we'll have a jumping seminar again.

I took him to see some agility trials during summer time, guess we should start it again. Indoor trials are so different, more noise, less room.

I have started writing our training update, but meanwhile, here is something in video format.