I haven't taken enough pictures of Kumma. On the other hand, better to use time for training than for shooting photos. Kumma weights now 10.8kg.

Here is what we have trained recently:
Some friends have asked me if it feels difficult to wait until Kumma is old enough to jump. Well, not really... We have plenty to do! It is not important for me to work on real full size agility obstacles, or to get my dog to jump high. I love each and every tiny training step, and figuring out how these steps are put together like a puzzle to get complete and complex behaviours.

Tomorrow some fun: we will meet Kumma's siblings and get some special training!
Lähettänyt Lumipyry klo 12.36 Ei kommentteja: 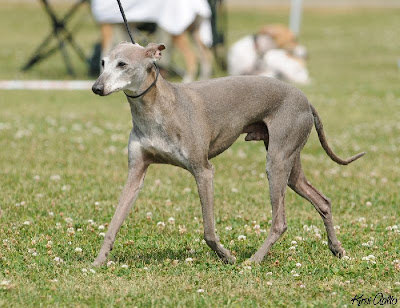 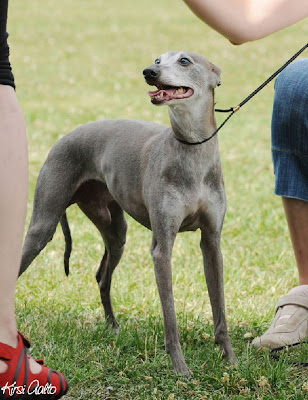 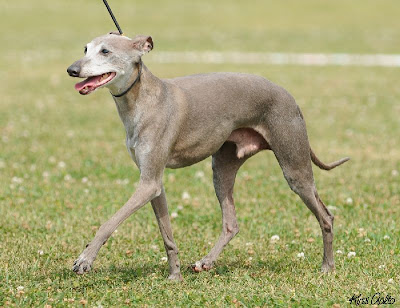 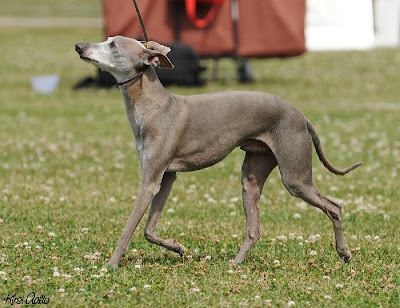 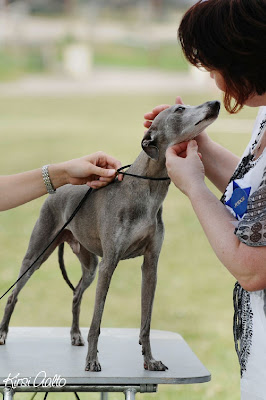 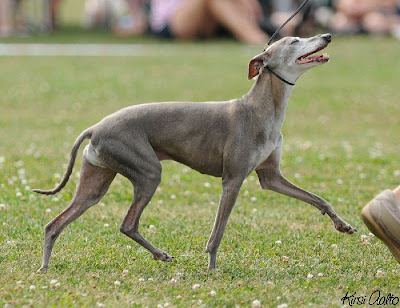 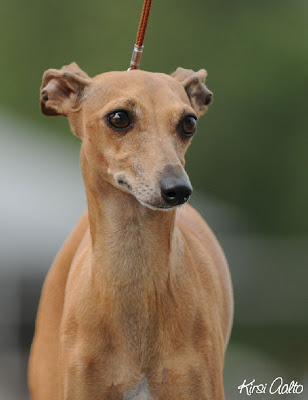 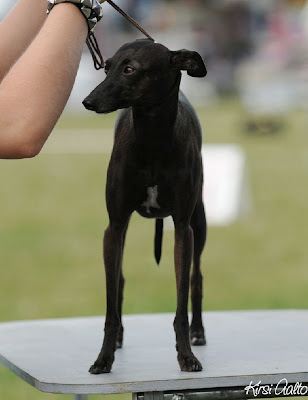 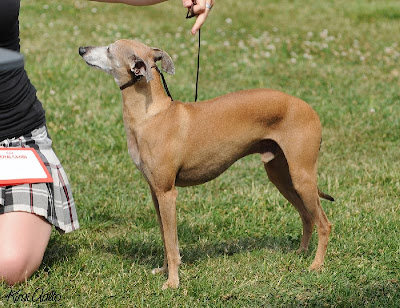 Yesterday there was an IG specialty show, SIC Club Show, at Tuomarinkartano racing ground. I had both Hoppu and Neeo with me, but only Hoppu was entered in the show. Hoppu is always so happy at that place, as we have spent many good racing training and trialing moments there.

Barbka Novak from Slovenia was judging. Hoppu's result in veteran class was excellent, and placed 2nd after a veteran male that won also BOB. Hoppu could have moved better, but it was really hot so no wonder he was not so eager to run around the ring. In any case I'm proud that I have a grey hurricane that I was able to take to the ring at the age of 11.5 years.

There were many familiar faces and dogs. It was great to see Hoppu's and Neeo's grandchildren. One of Hoppu's granddaughters made yesterday a new racing record at Hyvinkää race track.

I hope to add some pics from the show later. Here are the little hurricanes in 2001: 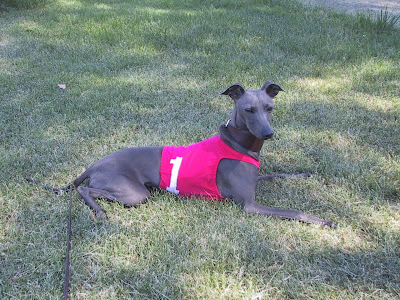 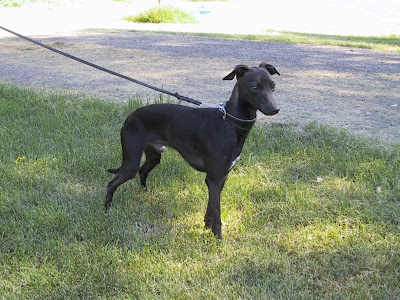 I was planning to go to each HAU Open agility trial with Kumma, to socialize him. Sessions started two weeks ago, but as Kumma had diarrhea we were not able to go. Kumma got better soon. Then Neeo started vomiting. On the second night there was also blood. As it was a hot day, and his energy level was going down, I decided to took him to the vet. Fluids were given to him under the skin, and antibiotics for 10 days. Neeo was clearly unconfortable during the evening as well as following morning. I didn't see him drinking at all, and started to give him some water each hour. As he was really tired and it was hot again, I was wondering whether I should take him to the vet again. Fortunately in the afternoon his tail started to wag when someone was talking to him. Now he has fully recovered.

Last week I managed to take Kumma to one HAU Open trial. He was excited to see so many other dogs and people, and tried to go to each direction at the same time. On the other hand he was able to concentrate to simple tasks when I asked for it. We made some hand targeting and sit training. There was a Dalmatian puppy of the same age, and Kumma played with her a lot.

Yesterday Kumma was running, and hit the side of the doorway. He hurt his front leg, and cried for a while. He is using the leg normally, but limping slightly. I will follow it for some days.

Today I introduced a tire for Kumma for the first time. It is a bike tire without any frames. By shaping Kumma understood very soon that the name of the game is going through. Great fun for both of us!

With crate games we have also mades ome progress. I moved one crate to backyard to make training there easy. Next step is to introduce a cue.

We spent the Midsummer weekend at a summer cottage. The hurricanes enjoyed cottage life. They were running in and out, around and around. Kumma was happily playing with children. Neeo went to check the neighbours, but came quickly back with a strange dog behind him. Next day Neeo's back leg was swollen, and he was limping. I'm pretty sure the stranger didn't touch Neeo, but he might have hurt the leg when running back. Or then it was caused by something else. What's important is that now the leg is recovered.

The little puppy is not so little anymore. Kumma weights now 8.6kg, more than his big brothers. Kumma and Neeo are playing and running a lot together. Training sit is progressing nicely. I'm now adding duration, and using a release word each time. There are plenty of other topics in our training list. Yesterday I wanted to take Kumma to visit an agility trial. Plan changed as Kumma got diarrhea. He vomited a couple of times at night. Today I have given him small rice portions with lots of water. He is eating well, drinking, and has not vomited anymore.

I entered Hoppu to a special IG breed club show. It is an unofficial show accepting also neutered males. Last year Hoppu's mother Sade was the best veteran, at the age of 13 years. Neeo's mother Nina-Rosa, 12,  was recently chosed as the best veteran at the club show in Czech. I love to see old dogs enjoying shows! Why didn't I enter Neeo as well? Because his focus is in socializing, and not in nice ring behaviour :)
Lähettänyt Lumipyry klo 6.04 Ei kommentteja: