Today I was again proud and happy of Neeo, who made a clean run at an agility trial in Kirkkonummi (indoor sports facility). I liked the course, nice combination of fast parts and patterns requiring tighter handling. The run was not perfect, and we got some seconds of over time. But never mind, that is not important for us anymore. It was simply a joy to see how lightly and eagerly Neeo performed all obstacles, at his age.

Weather is again more winterlike than needed. Temperature is -20C and snowstorm is forecasted. We'll stay inside tomorrow. At least it has been sunny and days are longer, there is little hope left that spring will come. 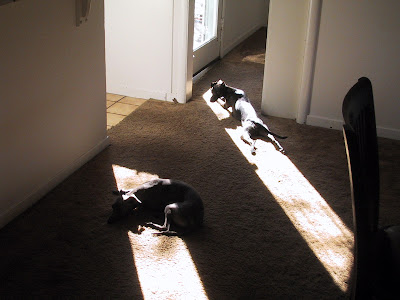 Sun lovers in 2002 when we lived in California
Lähettänyt Lumipyry klo 13.15 2 kommenttia:

On Sunday there was an agility trial in Hyvinkää, two medium 3 agility courses. We came there directly from our weekend break, at last minute, and I was not sure how Neeo would perform after a high activity weekend. Kari Jalonen judged both courses, and they were really challenging ones. My handling skills were not smooth and timing was poor in many cases. Lack of practise, it's clear. Neeo on the other hand had good drive, and he clearly enjoyed the runs.

First run was disqualified. After a tight turn, Neeo flew into the tunnel which was not the correct choice. Not a bad run anyway, taking into account our level of training.

Second run was a better one. Only one fault, from A frame contact. But there were several moments of struggling due to my bad timing, and we lost time. We placed 13th out of 37.

I'm proud of my little black hurricane, who can still fly at the age of 10! 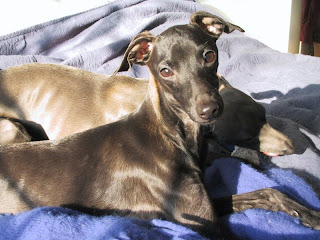 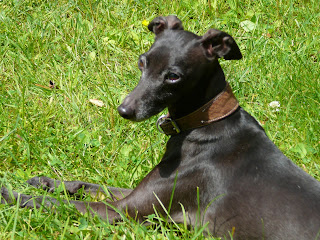